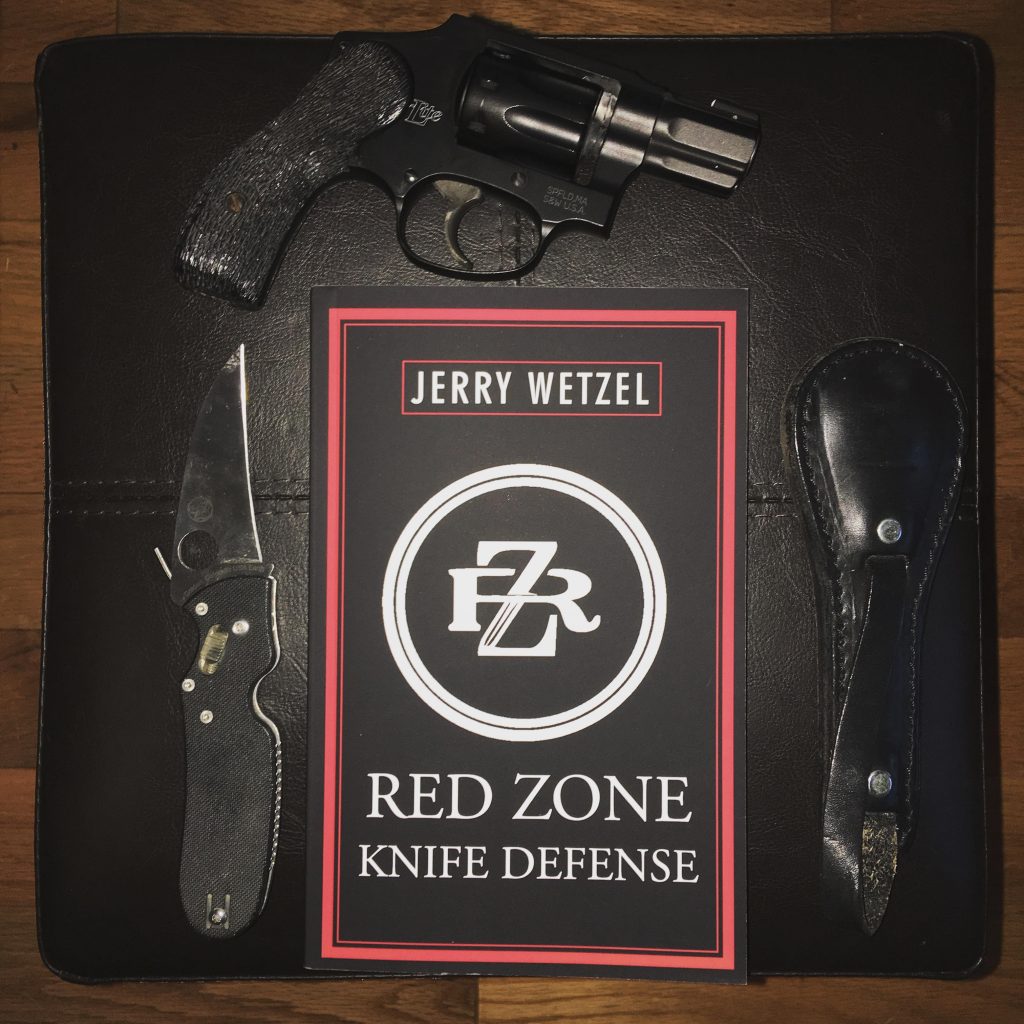 Coach Jerry Wetzel of Red Zone Threat Management just released a book outlining his excellent unarmed knife defense program. It is 185 pages of rock solid, testable, and easy to implement blade (and blunt weapons) defense. With this book, a willing training partner, a training blade, and a place to train, you could get functional at shutting down a real knife attack and die less often.

The first chapters are a great framing of what a knife defense program needs to look like. The author discusses traditional knife defense programs and outlines the problems with their training modality. The major issue with most is a lack of ‘aliveness’. The highly orchestrated attack lines and total lack of aggressive forward drive one sees in most knife defense programs doesn’t line up with reality. He also points out that you’re not likely to run into a trained knife fighter, but rather someone with a pointy implement and the desire to put it into you as fast and as much as possible. If your knife defense doesn’t take this into account, you need to look into another method.

The author systematically points out the flaws in logic that several knife programs seem to ignore. After you read the early chapters, you’ll be shaking your head at the time you wasted pursuing these other programs. Live and learn.

The Real Secret is that the answer lies in consistent training and understanding what we’re training for.

How Knife Attacks Tend To Look:

The best thing about the RZKD program is that it can be trained at full speed, and that the feeder (knife guy) can give a genuine effort to stab you, and you have a reasonable chance to shut it down.

Real attacks have aggressive pressure, multiple rapid attack lines, you may not realize the knife is in play until you’re stabbed, and your empty hand skills will come in real handy when dealing with this problem (so get some), both parties fixate on the blade, it could be really bloody, mostly stabs and NOT slashes, mostly to the torso, and you might have to overcome some of your instincts to be successful.

Coach Wetzel stresses that we might indeed get cut, maybe even badly, but we need to continue fighting until the lights go out, because quitting is not an option.

The Red Zone Knife program blends seamlessly with the other modules that they teach. Commonality of techniques across disciplines, emphasis on cultivating awareness and space management, non-diagnostic defensive postures, and principle based self-defense is the best thing going, in my opinion. Dominating Posture, Pressure, and Position is the key to digging yourself out of the hole.

The author addresses several scenarios in which we might find ourselves:

Luckily for us, the way to deal with these issues follows a very streamlined decision tree, with a common road map to follow.

Step Three:Two-on-One to the ground if the attacker presses in, or the Lasso if he retracts the weapon bearing limb.

It’s as simple as this (but it’s not always easy). The author also covers a few less common circumstances to try out including fouling a draw, working against a wall, the ‘hostage’ type scenario, and grounded situations.

I’ve trained in several seminar style classes that included RZKD methods, and I am super excited that this book is out to have a book to work from for my training group. I think you’ll really like. 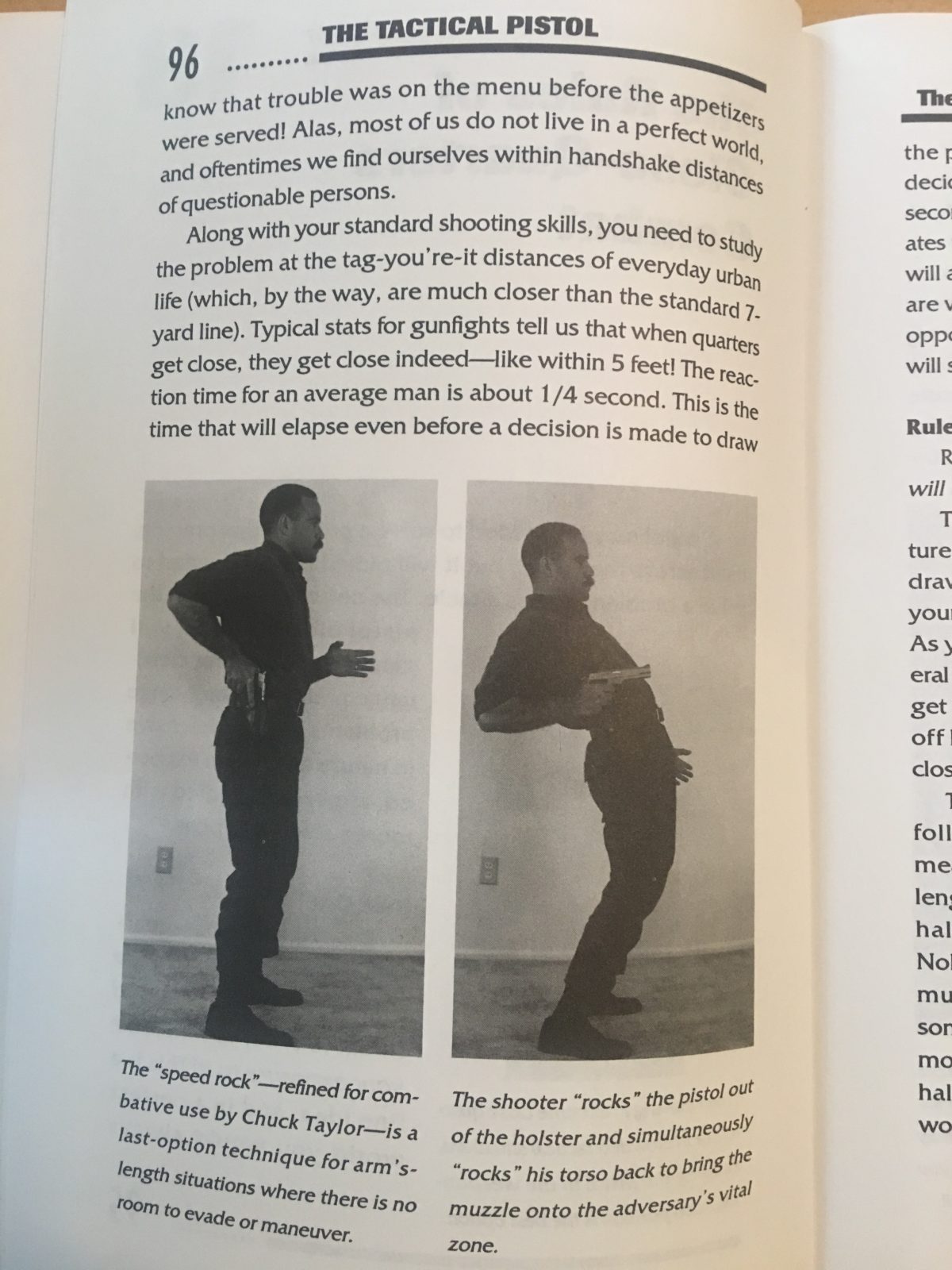 A critical aspect of personal protection is situational awareness. An important facet of situational awareness is the ability to know if we’re being watched or monitored. We as private citizens should practice surveillance detection. We want to notice if a person or group of people are patterning our behavior and monitoring us or our families (or businesses) with the intention of some sort of attack.

The surveillance could be as simple as someone loitering outside of a gas station for opportunistic crime or panhandling, through stalkers with violent intent, or as complicated as years long terrorism plots. Surveillance is a critical part of all of these criminal activities, and therefor surveillance detection is a topic you should understand.

I was interested in this topic, so I found the book Surveillance Detection – The Art of Prevention on Amazon and started to study.

The book defines terms and dispels some myths that exist around this field. Throughout the book the authors use anecdotal and hypothetical examples to illustrate their points and allow the reader to more easily visualize the techniques described. They carry the reader from designing to implementing a SD program, all the way through what to do if surveillance is detected. It’s quite thorough.

The authors give ideas for individual, small business, corporation, law enforcement, and even military level surveillance detection operations. You can be as elaborate as you choose to be.

I’ll quickly run down the major facets of SD and note things I found useful. The steps to building a personal surveillance detection program include: The book also goes into depth about building an operational plan for team-based SD. This is more in depth than we need to go, but I found it interesting.

While the focus of the book is primarily on a higher level, team based, corporate SD team (because it’s the most complicated), a little imagination will give you ideas that you can implement for your family. I found this to be an interesting read and worth of my time.

Mark
If you find value in my ramblings, please subscribe, share, and shop through our amazon affiliate link.

During my yearly training audit, I reminded myself that I needed to get some more education on defensive driving and vehicle tactics. As a result, I purchased several book related to this topic on Amazon.

This is a brief review of Drive To Survive!

I started reading this book as soon as I got home from hearing Dr. Sherman House’s lecture on Becoming The Civilian Defender at the Hebrew Hogger Fundraiser last weekend. He and I were on the same page regarding critical skills to practice. His lecture reminded me that I need to get after my lagging skill-sets. Performance and defensive driving is something I don’t have official training in. I’ve started with this book.

The book’s author is Curt Rich, who was a Vietnam War vet and student of Jeff Cooper and Masaad Ayoob. So Rich wrote this book for the average person trying to drive in the real world, with discussion about avoiding everyday crazy drivers, everyday combat driving techniques, evading criminal activity on the road, high performance maneuvers to evade capture, positioning your vehicle in the real world, anti-kidnapping and carjacking techniques, and avoiding “Murphy” on the road.

Some of the topics I found interesting:

This book was written in 1998, so several of the technological advancements he mentions on luxury cars are now standard in nearly all vehicles. The tactics are still completely applicable.

This book is DEFINITELY worth your time. It’s a short read at 125 pages or so. Considering copies are $0.01 plus shipping, you’re silly not to have a copy on your shelf.

If you’ll excuse me, I have some bootlegger’s turns to practice…