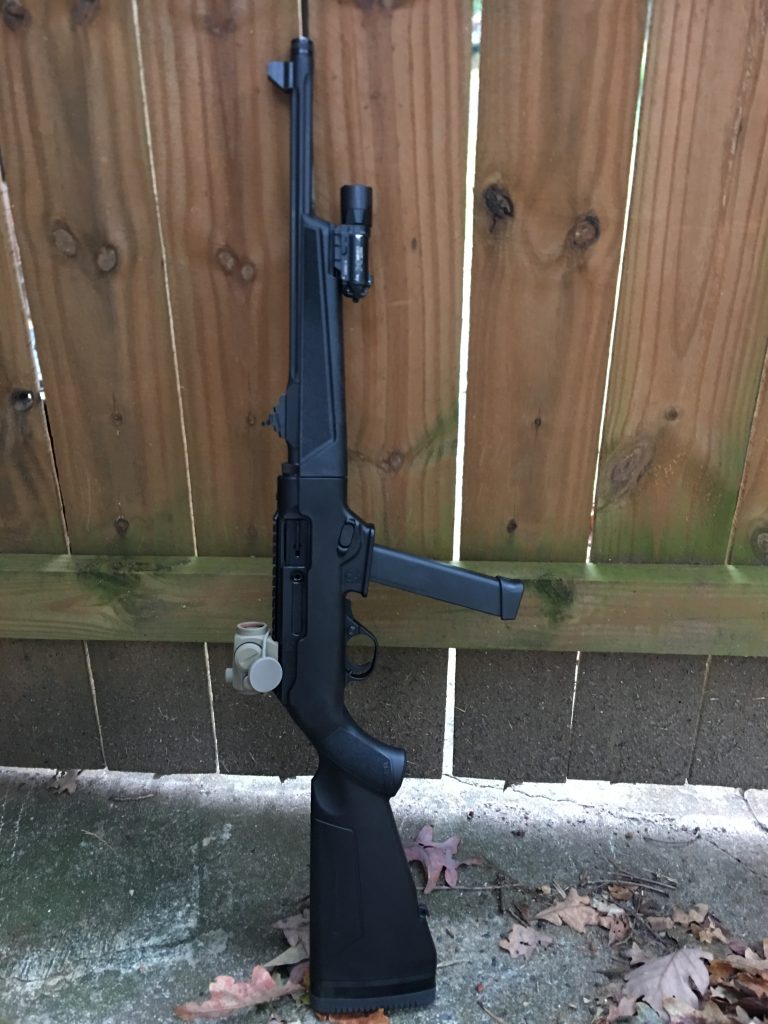 If you read my posts on the Ruger 10/22 (part 1, part 2) that I set up for home defense, this post will contain echoes and similar logic to that series. That particular .22 now lives at my parent’s house as their home defense rifle. Since we had a gun-void, I sought to fill it.

Find a carbine that my entire family could confidently use for self defense in the home, be willing to train with despite being recoil/muzzle blast-sensitive shooters, and keep at a reasonable cost. The ultimate goal is to build shooters with sufficient skill to make high pressure shots with no-shoots downrange on low probability targets. The only way to get there is if shooting isn’t a chore or abusive to the senses.

Ammo costs and availability are a factor. We have a limited income, so a more affordable caliber makes sense for us. In my experience, less expensive caliber doesn’t mean spending less annually on ammunition, it means buying more ammo for the same price. More ammo means more practice, which means more proficiency.

We also don’t have $1200 for an AR-15 pattern 9mm carbine. We have a cost ceiling that we need to stay under. I have a pile of Glock pistol magazines that largely go unused since I’ve switched to Double Action Pistols. Using Glock magazines would be a nice bonus to save on support gear.

We have a time limitation. I need to maximize the training time, and blunt the learning curve by picking a platform that lends itself to quick proficiency. We rarely get time together, period. So finding time to go to the range is exceedingly rare. I have to strive for efficiency. Rifles are easier to shoot well. Four points of contact with a rifle beats two points of contact with a pistol. A red dot sight makes the learning curve easier for getting hits.

For the shooters in my family, I need to be very considerate of recoil, and muzzle blast. My wife is quickly turned off to shooting a 5.56 rifle at indoor ranges due to the chest thumping concussion and flash that an AR-15 gives. She’s good for maybe 30 shots before she’s done. If concentration and focus is gone after one magazine, then competency will be impossible given the rarity of our range trips.

My wife isn’t a shooter. She wants to understand and be able to run all of our guns, but she doesn’t love shooting like I do. I have to be considerate of her time and pick something that she might enjoy more than an AR or shotgun.

I’d wager that many of you might be in a similar boat. It’s really time to bump the obsession with terminal ballistics down the list and keep context at the top. Despite what the ‘5.56 AR-15/ 00 buckshot or nothing’ crowd says, it’s more important that all the shooters meant to use a firearm can achieve a certain level of competency. If that means a .22LR, then that’s what it is. I wanted to give a 9mm carbine a chance, so here we are.

This is the reason we want a rifle that anyone in the house can use. My greatest concern is the shooting problem of a home invader with a downrange no-shoot. Not that it needs saying, but in the real world, it is very likely that there will be no-shoots forward of the ‘180* range safety line’. In fact, it’s quite common in home invasions for a husband to answer the late-night knock on the door, only to be overrun by bad guys. If I’m downrange, I want to make sure my shooters are competent enough to shoot them well, and not shoot me. It’s a self-preservation thing.

Story time to drive the point home. One of Tom Givens’ Students had to make a difficult shot with her husband down range:

A struggle ensued, during which the homeowner was shot in the thigh by one of the suspects. The homeowner’s wife was at the front door to greet her husband, and saw the attack. She ran upstairs, got her handgun, opened the bedroom window and engaged the suspects with several shots from the window.
She hit one suspect, and both fled.

As the husband neared the front door, he heard the dogs growl and ran back to his bedroom, arming himself with a can of wasp spray, the records say. A man charged him in a hallway, and the husband sprayed the wasp spray in the intruder’s face, but it had no effect.

“The fight was on,” the records say. Both men tumbled to the floor, and the wife ran out with a baseball bat and struck the intruder with it until it broke, according to the documents.

After about three minutes, the husband yelled to his wife for help, “not knowing how long he could hold out in the fight,” according to the records. The wife “ran to the kitchen, grabbed a knife and stabbed the suspect several times until he quit fighting.”

These instances are not rare.  That’s reason enough for me to want good shooters in the house.

I decided that I wanted to try the Ruger PC Carbine in 9mm. It checked a lot of the boxes that I had for this purpose. There’s a lot of reasons I went with this over some of the other options out there. I’ll make a quick list of the big ones:

Next up will be some details on running it faster, optimizing the setup, and designing a training program.