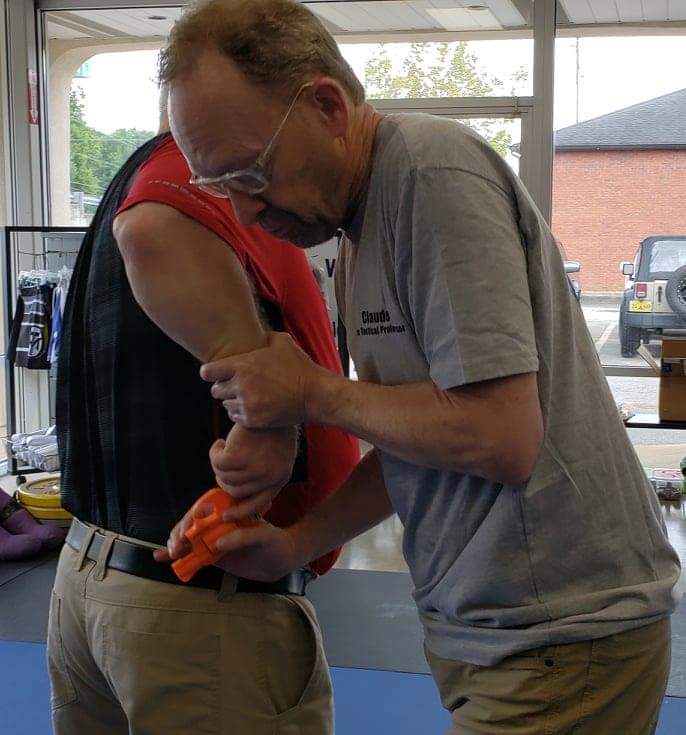 This is going to be a look inside my head at the stuff that keeps me interested in shooting techniques. I’m going to describe two general schools of thought (as I understand them) about building a self-defense grip on the gun in the holster. Then will have an argument with myself, attempting to make a case for one over the other and address each point of contention. First I’ll describe the general concepts.

The Two Angles of Attack.

The first is a ‘downward draw’/Full Firing Grip made in the holster before the gun moves. This is usually characterized by making a U shape out of your hand and funneling the backstrap/beavertail into the web of your hand until it rides as high as it can go and stops, and then curling the three fingers and flagged trigger finger into position. The thumb can do a number of things. It can be flagged straight, it can wrap to the otherside of the gun and form a one handed shooting grip, or it can be used to cover the hammer or rear of the slide to facilitate building a two-handed grip later on. Once this FFG is built, the gun starts its vertical path in the presentation. You can spot this draw by seeing the gun move down just before it starts moving up. This is, in my experience, a more robust grip build. Though it is not faster.

The second is an ‘upward draw’/’claw’ draw. Using the three little fingers to initiate building the grip and finalize the grip either simultaneously or once the gun is moving up and out of the holster. This type of draw requires very accurate finger placement and very repeatable gear setup and position. It can be spotted by looking for the gun to immediately lift once the grip is built. Usually the hand marries the gun fingers first with an upward or directly inward motion. The index point is often the distal joint of the middle finger finding a spot on the pistol frame, or the vertically flagged thumb looking for the inside edge of the rear sight.

Here is Jedi from Modern Samurai Project showing his version of the hook.

I don’t know exactly who/where it came from (can someone like Karl Rehn help me out?), but here are Col. Cooper and Louis Awerbuck demonstrating pistol handling and you can see the web meet the back-strap downward every time they draw. This is a great historical video and still very informative.

Origins of the upward draw/claw/lifting index

Without a doubt, this lineage of grip has its roots in competitive shooting. You can see Rob Leatham and a host of early IPSC competitors using this in this clip. It also is where you see the ‘straight line’ presentation where the muzzle moves on an escalator from holster to eye line and stops as the shot breaks. Efficiency and complete rounding of all the corners and wasted movement. This is pure speed. A whole lot of competitive shooting technique has come over to the defensive world and that’s a really good thing.

If you want to go as fast as possible, the crucible of competition has shown us that this lifting or claw style draw is faster. Bar none. John Johnston of Citizens Defense Research calls these blazingly fast techniques ‘Stupid Human Tricks’ in his class Tests and Standards (which is a fun and competitive class that I found productive to attend). He shows the class some of these ‘hacks’ for more rapid gun access. It’s a non-contextual purely mechanical shooting class. Here’s a clip.

Here is a competitive shooter demonstrating his draw on the timer. Note how his feet and hips are indexed exactly towards the target so he’s not fighting his body alignment for the shot. Also note how he touch-checks the pistol just before the timer goes off to build a kinesthetic reference point so his hand knows just where to go. You often see really fast self defense guys bumping their forearm on their gun before the timer for a similar purpose. It’s a small rehearsal.

So being fast doesn’t matter? So you think competition skills are not useful for the streets?

No, I’m not saying either of those things. I use a timer literally every time I go to the range and in nearly every dry-fire session. There is a timer in every gunfight, you just don’t know when it beeps. I also love competing and working out kinks with gear and to have some time and peer pressure to increase performance anxiety. If you have the mechanical ability to shoot .15 second splits, then shooting .3 second splits will feel slow. If you can do stupid human tricks and break your first shot from concealment in .80 seconds, then taking 2 seconds will feel like an eternity. The nagging thing in my mind are the little intangibles that a downward draw affords you that a lifting draw doesn’t. Those things, though not easily quantifiable, are important enough to make me personally stick with a downward draw.

I think the allure of the timer and having numbers is very important for tracking progress and meeting standards. I also think that choosing techniques on time alone might be missing some of the picture. Defensive gun uses are almost always task loaded events. That is, your attention and processing power are divided among many tasks simultaneously. Therefore, I feel obligated to choose the method I feel has the highest probability of success over the greatest range of circumstances. I don’t have the time to refine a drawstroke for every circumstance and frankly I don’t think I could decide quickly enough in the moment. I’m just not that good.

How do I practice?

The same way as the fast guys, just on a different technique. I use par timers, shot timers, or sometimes no timer. Sometimes I go as fast as I can until the wheels fall off and I bobble, then I work on reliably learning to draw in that time. Other timers I work for perfect reps with no timer. I work from a variety of positions and postures, with my hands in several places (in pockets, at waist, surrender position, in the ‘fence’). Sometimes I just get a grip, other times I draw to a shot, other times I draw to a low ready. I spend about 5 minutes a day in dry-fire and I concentrate on draw in most of those sessions. I just accept that my draw will never get faster than it would be if I did a deep dive on mastering the claw/lifting draw. Then I get on with my life.

If you made it this far, congrats. You’re a nerd too. Thank you for coming to my TED talk. How do you do it?

Some of my fast fast friends and people I know.